When Georgina French Edwards’s name was called as the winner of the Central Housing and Planning Authority’s housing lottery, at the Housing Solutions 2017 and Beyond Exposition on Sunday, Edwards said she felt like she was living a dream.

Edwards stated that she could not believe that she had just been given the opportunity to own a house lot after being denied for so many years.

“The first thing when she (the minister at the drawing) said that the person was from East Ruimveldt, my heart stopped, and then it start back beating fast, fast, fast, and I was on the edge of my seat so when she said Georgia French Edwards  I could only jump up and say thank you Jesus,” Edwards recalled.

Speaking to the media today, at the CH&PA on Brickdam, she said, “…till now I can’t express my feelings, but I am happy to have that house lot, because I need a home of my own.”

Edwards said that she had a premeditation of the tidings to come. “I told my son let us go up (to the expo) on Saturday night, but he said that he could not make it, but on Sunday he came for me, and we went up there, and I was walking around and seeing the houses, and I telling him, what and what I like all the while feeling to myself something would happen,” she said.

She explained that whilst going through the expo, she heard the talks about the house lot raffle and went up to the CH&PA booth to complete the form. “I always walk with my documents, but when I took out my bag, my identification (ID) card was not there, so I asked to call home to get the number,” Edwards said. She recalled that “when I call home they could not find the ID card…they give me the passport number and I write it on the form and handed it and I told my son that we are not leaving, ‘let us wait for the drawing’ and so we just waited because something within me was telling me something was going to happen and it is going to happen tonight,” she said.

The 67-year-old vendor had almost given up hope, after waiting for over 17 years for a response from the CH&PA. She first applied for a house lot in 2000, when she was employed at the courts. She described her current housing situation “as not up to standards.”

Edwards said that whilst she does not pay rent, the owners are waiting for her to move out to break down the house. She is happy that she will soon be out of that situation.

She spoke particularly of support and words of encouragement that she got from Minister Adams-Patterson, and Personal Assistant, Remington Nelson. “I would like to thank Mr. Nelson, because I would keep coming here (to CH&PA) all the time, every month and the last time I was here and I did not get through, I started to cry and his words were to me, ‘keep praying, don’t give up,’ and every time the doubts came within my mind, those words kept ringing in my ears and I keep praying so I give God thanks,” she said.

The next step will be to construct the home and for this Edwards said that she has already gotten pledges from two of her closest grandchildren. “I alone cannot do it, but I have grandchildren who are with me and they are going to assist me to build the house as fast as possible,” she said.

Housing Solutions 2017 and Beyond Exposition captured in one place, the government’s focus for its housing programme. The house lot lottery was part of the four-day programme. 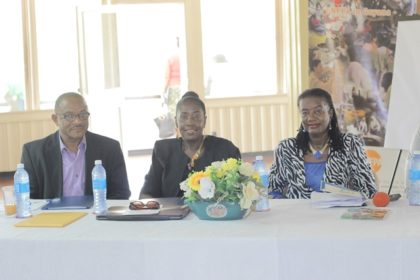