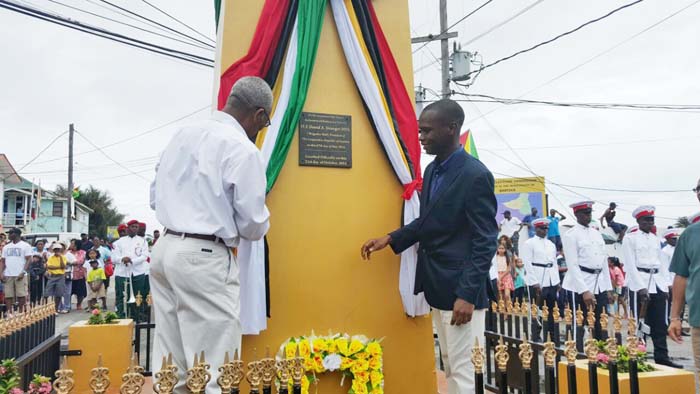 It was an historic occasion for the approximately 15,000 residents of Bartica yesterday, as they witnessed their community being officially declared Guyana’s seventh town.

Doing the honours of handing over the title was President David Granger. Hundreds of residents packed the streets and swarmed every corridor in sight to get a glimpse of the Head of State during the proceedings.
Granger in his introductory remarks welcomed members of the National Assembly, Diplomatic Corps, visiting Mayors, Regional Democratic Council Chairman, Gordon Bradford, Mayor of Bartica, Gifford Marshall and other invited guests.
The President said that he was filled with joy yesterday as he was part of a momentous event.
He said, “In the beginning, before the Portuguese came to this land, before the East Indians came to this land…there was Bartica. Bartica was established as a mission 185 years ago. It is a blessed place and was conceived and established to further the work of God.”
The President said that yesterday’s occasion, which saw Barticians celebrating its elevation to township, will continue to see residents carry out the work of God in the spirit the community was founded in years ago.
Granger said that Bartica has always been regarded as one of the finest settlements in Guyana. He asserted that in 1887, an ordinance was actually passed to make Bartica a town.

“What happened between 1887 and 2016, I cannot explain, but as far as I am concerned, Bartica always deserved to be a town and whatever happened was an historical error, a great travesty. Bartica is always in my heart. The Church of St. John the Baptist was established 185 years ago and (today) I will join you, the residents of Bartica in worshiping there, the first church I worshiped at,” the President expressed.
The Head of State said, “You are a town now. This is your moment to dazzle the rest of Guyana. History is being made here. Instead of being the third, you are now the seventh town in Guyana and you should all be proud of your achievements and I congratulate you.”
Granger said that for the past 100 years, Bartica has been deemed the gateway to Guyana’s gold, diamonds and timber. He said Bartica is now the capital of Region Seven (Cuyuni-Mazaruni) which is larger than the Netherlands.
The Head of State told the residents that with its new status, it must look to the future and lead by example.
Granger also informed the residents that he recently attended one of the most important conferences in recent times. He said that the conference which was held in Washington D.C, USA reaffirmed his conviction that Guyana must move quickly to develop a green economy and Bartica must lead the way.
The President said that Bartica is also going to lead the way in solid waste management and recycling. Granger said that Bartica is poised to becoming the laboratory for Guyana’s green economy.
He said that efforts over the next four years must be geared towards sustainable forms of renewable energy. The President said that the nation must make vigorous efforts to rid itself of the addition to gasoline and dieseline.
“Bartica must lead the way and be a model town and show all other regions how Guyana could supply enough energy without depending on fossil energy…Bartica must become the motor to transform Guyana onto a platform of sustainable green development.”
He recalled that last year, on October 3, something drew him to Bartica to launch the first National Tree Day. Granger said that soon, every avenue will be surrounded by “green.”
Apart from being a “motor”, he said that Bartica must become a magnet for investment.
The President said, “We will get rid of that terrible little benab at the airstrip. And we will have a modern municipal aerodrome with solar air conditions so that investors will come from all across the Caribbean and will fly into the region with bags of money to develop the resources of this great region. So we see this region led by Bartica resting on four essential pillars…”
He also congratulated the community for the clean surroundings and the clean up initiatives undertaken. 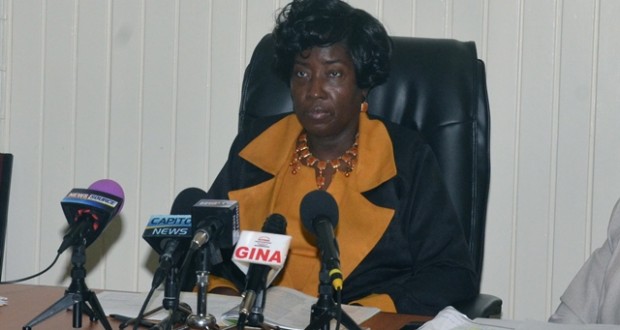