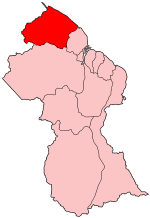 The Barima-Waini region gets its name from its two main rivers. The region is predominantly forested highland, bordered at the north by a narrow strip of low coastal plain.

Very few people live in Region One. There are just 18,590, who live mainly in Amerindian settlements.

Logging is the region’s main economic activity. The largest logging operation is run by the Barama Company, which transports timber to Demerara to be processed into plywood. There are many other timber operations, as the tropical rainforest yields many species of hardwood and other useful types of wood. Mining for gold and diamond is also done in the forested area. Many porknockers set up dredges of various sizes.

The coast of Region One is known for its beaches, particularly Shell Beach, the only beach in the world to host four species of sea turtles during their nesting period from March to July. One type, the Olive Ridgley, is almost extinct. Another type, the Grant Leatherback, is the world’s largest turtle. The Scarlet Ibis, the national bird of Trinidad and Tobago, is also a common sight on these beaches.