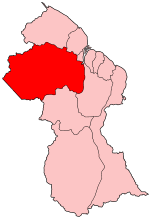 The Cuyuni-Mazaruni Region contains two of the four natural regions: forested highlands and a small portion of the hilly sand and clay region.

This Region brings to mind the majestic Pakaraima mountain range. Mount Roraima (2,810 metres high, standing at the point where Guyana, Brazil and Venezuela meet) and Mount Ayanganna are in this mountain range.

Most of the 15,342 people of this Region are involved in mining for gold and diamonds. Omai Gold Mines Ltd, which extracted 250,642 ounces of gold last year [1994], is the biggest gold producer in this Region, and in Guyana.

Under the Upper Mazaruni Hydroelectric Scheme, a hydroelectric plant was to provide electricity for the Region was planned, but it has not yet been built. It would be a great asset to the Region’s development.
There are eight Amerindian settlements in the area of the Pakaraimas, where crops are grown. These crops supply the settlements and gold and diamond mines in the Region.