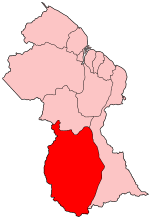 The population of 15,087 lives in scattered Amerindian villages and land settlement schemes.

Because of the grassy savannahs, the Rupununi is considered to be ‘cattle country’. Most of the cattle are farmed to produce beef, and a few are kept for milk. There are large ranches at Aishalton, Annai, Dadanawa and Karanambo. Much of the beef produced here is sold in neighbouring Brazil, because transportation to the other regions of Guyana, especially Region Four, is very expensive.

The people of this region also mine semiprecious stones among the foothills of the Kamoa Mountains and among the Marundi Mountains. A wide variety of craft is produced in many of the seventeen Amerindian villages, and sold mainly to Brazil.

In Region Nine, you can see the Giant River Otter, the Arapaima (the largest freshwater fish in the world) and the black Cayman.