(From Left) Chief Executive Officer, Lelon Saul, Director of Projects, Omar Narine and several contractors at the signing for infrastructure developments in Providence and Peter’s Hall

Three hundred and sixty-eight families will benefit from infrastructural developments in the Providence and Peter’s Hall communities on the East Bank of Demerara.

The government has invested $545.8Million into the project. Agreements were signed today by several local contractors, who will carry out the preparatory works, and the Central Planning and Housing Authority (CH&PA), at the agency’s Brickdam office.

According to the Chief Executive Officer of the CH&PA, Lelon Saul the contractors were selected through a fair and open tender process.  He said, “Those who would have satisfied the requirements were evaluated and were deemed suitable to execute the work. The process was overseen by the National Procurement and Tender Board.”

Reminding that there are families anxiously awaiting the developments in the communities, Saul urged the contractors to ensure the works are completed in a timely manner. “I trust that you will adhere to the terms and conditions of the contract which you signed. If you fail to do so, as an agency, we will be forced to take appropriate actions”, Saul warned. 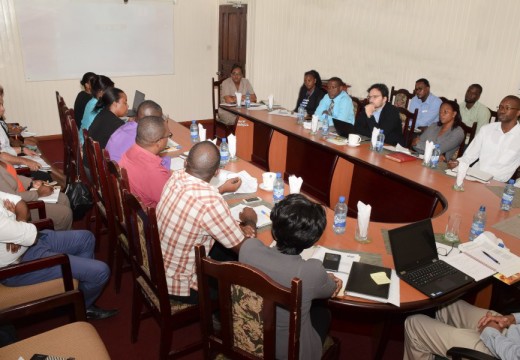