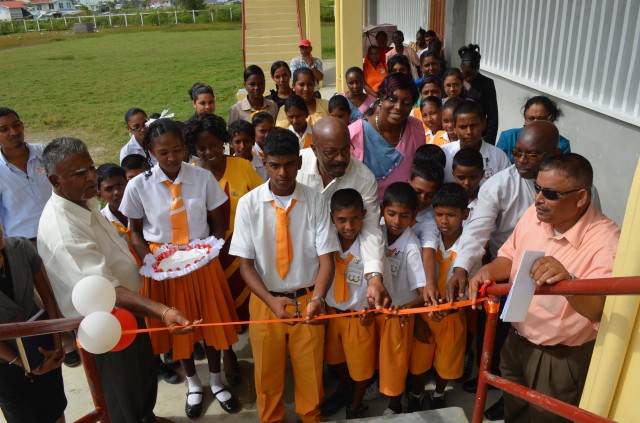 An annexe has been constructed at the Woodley Park Primary School in Region Five to cater for the delivery of secondary education for more than 150 students, including those of the Woodley Park and Rosignol Primary Top.

This facility, costing more than  $19M was among nine  projects, totalling about $41.3M that were commissioned  today by Minister of Local Government and Regional Development Norman Whittaker.  Accompanying the Minister was the Regional Chairman Bindrabhan Bisnauth.

The projects were all in response to needs of the residents put forward during consultations with the Minister or with other local government officials including officials from the Region Five Regional Democratic Council (RDC.)

Minister Whittaker noted that the annexe is in line with Government’s move to expand access to secondary education across the country. It is in this regard that in Region Five, the Ministry of Education has taken the responsibility to recently commission two new ‘A’ list schools and move towards the construction of structures to host two new secondary schools; Woodley Park and  Novar.

“One of the important indicators of the standard of living of the people of any country is the level of attainment of education, and that is why government is putting significant amounts of it, because we believe education is what is going to take our people out of poverty,” Minister Whittaker noted at the ceremony at the Woodley Park Primary.

“I am happy like you are because of the prominence that we give to providing infrastructure so teaching and learning can take place at all levels. We have found it fitting to invest a substantial sum of money to ensure that we have a structure here, and to ensure that movement from merely being a primary school with a secondary top become history and we now have a discrete secondary school,” he said.

Regional Chairman Bisnauth explained that originally it was planned that the school be one structure; an upper flat, but that the region was able to complete a bottom flat because of its astute management of its finance. In the end from a budget of $18.5M, the top flat of the facility was constructed at a cost of $14.6 and the bottom flat at a cost of $4.9M.

Bisnauth said that RDC will move towards getting the facility equipped to facilitate use as soon as March.

The Minister also commissioned in the Bath/Woodley Park area, a street from the main public road to first cross street that facilitates over 300 residents including farmers and students access into the new housing area at Block D1. It was constructed at a cost of $2.1M.

There was also the upgrade to a street in Experiment Housing Scheme valued at $5.2, which will benefit 700 residents and the construction of a fence for the Block D Community Centre Ground, valued close to a million dollars.

In the Blairmont NDC, three projects were commissioned with a total cost of $8M. Regional Chairman Bisnauth explained that the region was provided in its 2013 budget, the $8M to facilitate one project in the area, but after consultation with residents it was agreed that the three projects would be executed.

In the Rosignol/Zeelust NDC, a green heart timber bridge constructed at Bennett Dam was commissioned, as was a culvert at Yank Dam. The bridge costs $3.5M and the culvert $1.9M. The culvert is benefitting over 2000 residents providing drainage for the entire section between Yank Dam to Bennett Dam.