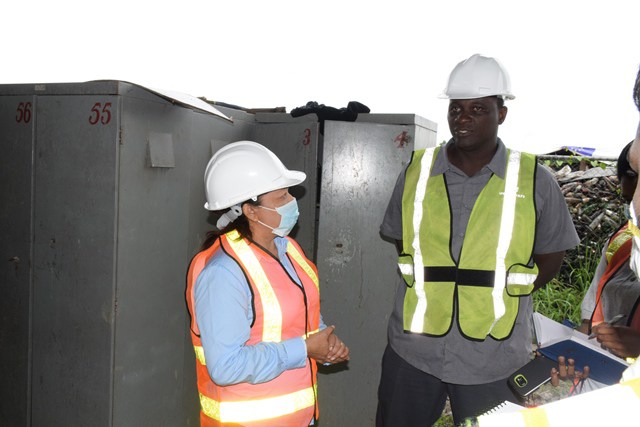 Minister within the Ministry of Communities, Dawn Hastings-Williams being briefed by Haags Bosch Sanitary Landfil Site Manager, Lloyd Stanton during the tour of the site, located behind of Eccles, East Bank Demerara.

Minister within the Ministry of Communities, Dawn Hastings-Williams, said that she is very happy with the operation of  the Haags Bosch Sanitary landfill site.

The Minister, with a team of officials today, toured the facility and got a first hand look of the operations at  the  site, located East of Eccles, on the East Bank of Demerara.

During a site tour, the team was given an  update on the developments for the first half of the year and future plans.  They were also given a demonstration on waste disposal.

A new feature added to the site is the wood and tire shredder, which the minister described as, “a very good idea that will help in reducing the volume of the waste that comes in through tire and pieces of wood.What I am happy about is that they will use the waste produces from wood and leaves to build a compost.” Compost is a organic  fertilizer which is used to enhance agriculture activities.

Some of the waste packed to be sold.

Hastings-Williams said that while the staff is equipped with the necessary safety gear proper systems need to be put in place to ensure their well-being.

Minister Hastings Williams also noted that systems need to be put in place to ensure that garbage is disposed in a proper manner, in keeping with the government’s vision of a ‘green and clean’  Guyana. “We need to teach our young generation to separate their garbage at home, ‘think, separate and store.’ We have to think about what happens after we store our garbage,” the Minister said.

The Minister added that her Ministry will explore systems where the garbage is collected separately. “We can’t ask

you to separate your garbage and we have one truck coming to your homes and they are dumping everything together. We will have to look at two separate trucks coming to collect the organic waste, and then another system where we collect the other waste,” she explained.

Site Manager, Lloyd Stanton,  said a number of works are ongoing to ensure that the site is operating at minimum standards. He said that Phase One of development works will be completed in September, after which Phase Two will commence.

The first phase, Stanton  said, is to get the cell from a confusing state to one of normalcy.  “We want to get it to what we would call a control dumping setting,” he explained.

Phase Two includes the reinstatement of the roads  and buildings, and capacity building for the staff.

Stanton  also pointed out that the well-being of the staff is a priority, and all measures will be put in place to ensure that they are comfortable. In the interim, the staff is benifitting from regular checkups.

The US$20 Million Inter-American Development Bank (IDB) funded Haags Bosch landfill programme catered for the closing of the  outdated and inefficient Le Repentir solid waste disposal site, in the centre of Georgetown. This has been replaced with the privately-operated sanitary Haags Bosch landfill intended to serve both the city and surrounding East Bank, Demerara neighbourhoods.