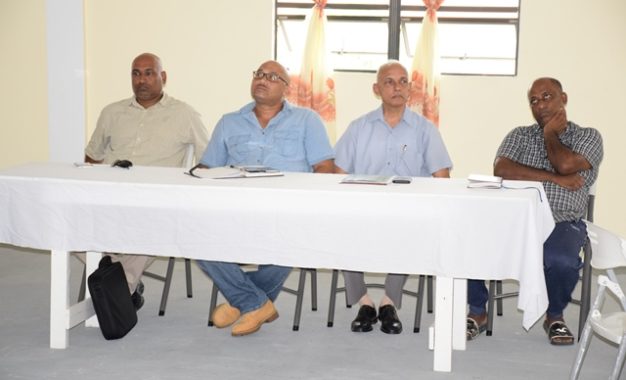 Minister of Communities, Ronald Bulkan with the Mayors of Rose Hall, Corriverton and New Amsterdam during an engagement with the councillors of the three municipalities in the Central Corentyne Chambers of Commerce building

Minister of Communities, Ronald Balkan said that the time for talking is over, and that direct action is needed with regards to the municipalities and Neighbourhood Democratic Councils’ (NDCs) calls for review of the property valuation laws.

Addressing issues pertaining to the revenue base of the three municipalities (New Amsterdam, Rose Hall and Corriverton) in Berbice today, Minister Bulkan said that, “the question of property valuations and revaluations is an issue that probably we have been talking about for too long and too much.” The revaluation is needed to bring valuation of properties and businesses in line with the 21st century.

“We have to stop the talking and get together a dedicated taskforce, now, and start to fast track this question of reform, and instituting modern property assessment scheme, where the tax burden can be more equitably distributed, and where the revenue base of our (town) councils can be addressed in a meaningful manner,” Minister Bulkan stated. This is to ensure that there are sufficient financial resources that would allow the Councils to attend to their activities and responsibilities.

Bulkan said that this taskforce would involve the Ministries of Communities and, Finance, and the Local Government Organs.

Minister Bulkan and a team from the Ministry of Communities including Permanent Secretary (PS) Emile McGarrel today, met with the Mayors, Deputy Mayors and councillors of Rose Hall, Corriverton and New Amsterdam at the Central Corentyne Chambers of Commerce building in Rose Hall, Corentyne.

The interactive session saw the Minister addressing the local councillors’ concerns pertaining to their councils’ lack of funds to execute meaningful projects, the sore issue of valuation of properties and businesses in the municipalities, and stipend for the councillors and tensions within 0ne of the councils.

On the issue of the property valuation/revaluation, Minister Bulkan also told the councillors that the council has the authority to determine the value of property taxes, and to bring these and its other revenue bases in line, with what it needs  to meet the expenditure that it  requires to carry its annual work programme.

Minister Bulkan assured that the government will continue to support the councils with subventions, to help in the carrying out of some of their duties. He added that the government will continue this intervention for some time, recognising that it has inherited a broken Local Government system, where the local authority organs were made to be reliant on the state for resources.

The Minister of Communities said however, that the government expects that the councillors will in time begin to “take ownership” of their councils. He noted the recent view expressed by President David Granger, that “municipalities must see themselves as corporations, and to begin weaning themselves off Central Government’s allocation to support their work.”

Bulkan pointed out that if the councils work to find their own source of funding, then they would not have to deal with the strings that are

attached to the financial support they get from outside sources. “You will be undermining your own authority if you expect persons to continue to fund your works,” he told the councillors.

On the issue of the stipend to the councillors, he noted that “there is nothing in the local government legislation that prevents the municipal councils from paying stipends or salaries to their councillors, once they have the means.”  The Minister urged the councillors to examine the means of financial resources within their municipalities and determine how they can leverage these to address this issue.

Addressing the concern of disunity within one of the councils, he noted that “there is a time for politics,” but that this is “not when we find ourselves in our councils; when we have to deliver to our people. When we keep those political blinders on, we are shortchanging ourselves, so once in the council, put that political consideration on the backburner, where it belongs.”

Bulkan urged the “shedding of the baggage” and embracing of those principles that would help the council to bring development and betterment, for the residents of the three councils of Berbice.

Minister Bulkan has been meeting with the Regional officials, municipal councillors and NDC officials across Guyana, to listen to their concerns and to, work together to identify ways of addressing them. 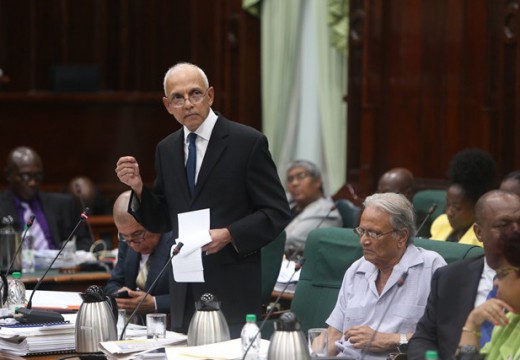 September 20, 2013 4 comments 7419 views
The Ministry of Local Government is moving to address occupancy at the ...